A Fork in the Road to screen THIS WEEK at the Manhattan Film Festival in NYC!

A FORK IN THE ROAD , a film about the unexpected routes we take toward redemption and family recognition the road of life, will be screening as a part of the Official Selection of shorts at the 2010 Manhattan Film Festival in NYC! 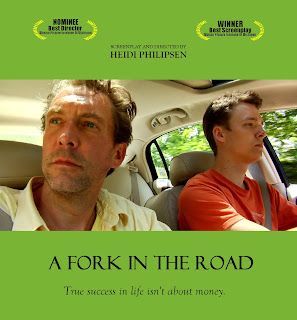 
All Manhattan Film Festival screenings are to take place at Symphony Space on the upper West Side of Manhattan.


and use promotional code RAC102 for a $2 discount, which makes tickets purchased in advanced only $8!
Posted by a plume with aplomb at 3:15 AM No comments:

A FORK IN THE ROAD's official premiere with the New Filmmakers' Series at the Anthology Film Archives in New York City!

For more detailed information on tickets, directions and times, visit either the New Filmmakers or Anthology Film Archives web sites, by clicking on the title links above.

You can also check out the film's official web site for details:


Hope to see you there!
Posted by a plume with aplomb at 1:48 PM No comments:

Check out the official web-site that accompanies this Blog: www.aforkintheroad-themovie.com for a glimpse at the official trailer, news and notes, as well as festival/screening info and where to buy your copy on DVD!
Posted by a plume with aplomb at 6:37 PM No comments:

"A Fork in the Road," the first of three short films in a trilogy leading up to a full-length feature, written, produced, directed and filmed on location in Ann Arbor, Michigan by Ypsilanti Township native Heidi Elizabeth Philipsen-Meissner, is to be exhibited and distributed online through Women's Film Network in late summer 2008.

"I'm really excited about distribution through the Women's Film Network, where (Women's Film Network helmer) Adriana Shaw is creating opportunity for female film-makers to have their works brought to the public. This is an incredible opportunity for me and my film to gain exposure -- a film-maker's dream," said Heidi Elizabeth Philipsen-Meissner about the exhibition/distribution plans.

The award-winning, fifteen-minute short, which was a part of the official, student film selection at the Reel Women International Film Festival in L.A. this past March, is about a family man, facing financial ruin and self-defeat, who discovers that true success in life has nothing to do with money, but rather love and respect from family and friends.

"A Fork in the Road" is a completely Made in Michigan film, featuring local talent Grant Krause, Barbara Coven, Matt Anderson and Shelby Howe, local cinematographer Joshua Roth, and film editor Marc Drake; filming was on location both in Ypsilanti Township and at the Northside Grill on Broadway in Ann Arbor.
Posted by a plume with aplomb at 12:19 AM No comments:

Stay tuned for news about distribution!
Posted by a plume with aplomb at 6:45 PM No comments: